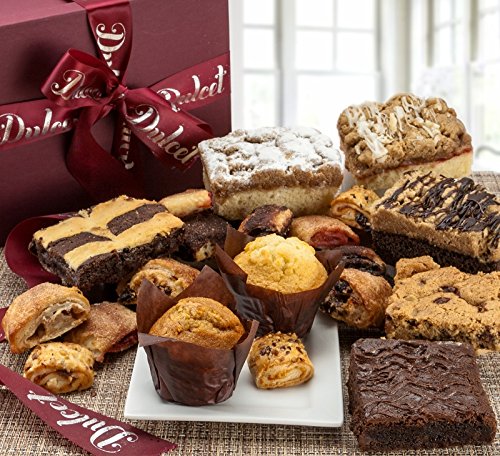 DO YOU WANT YOUR GIFT OT MAKE THE MOST LASTING IMPRESSION EVER? DULCET IS THE ANSWER - THE PERFECT GIFT THAT YOU JUST CAN'T GO WRONG WITH! 1 CHOCOLATE CHEESE BROWNIE: These brownies are an amazing blend of rich brownie and perfectly creamy cheesecake. It's layered with a cream cheese filling, and then marbled to create layers and swirls of cheesecake within the brownie. Prettiest and tastiest dessert of all time! 1 CHOCOLATE CHIP BROWNIE: Our Chocolate chip brownies are every chocolate lovers dream! Crisp edges and chewy centers, a pure brownie delight! 1 CHOCOLATE CRUMB CAKE: A moist chocolate cake topped with a thick crumb topping and drizzled with a semi-sweet chocolate sauce 1 OLD FASHIONED CRUMB CAKE: Our old fashion Crumb cake smells wonderful and tastes even better. The best part of the crumb cake is the crumb topping! Moist, tender - and irresistible... A heavenly treat! 1 RASPBERRY CRUMB CAKE: Moist, delicious & filled with a bursting raspberry flavor, the middle parts melt in your mouth and the crumbly topping adds a creamy, crispy texture to your eating experience! Indulge! ½ LB. ASSORTED RUGELACH: Our rugelach will warm the heart of every taster! Our satiny soft dough wraps around assorted fillings: Chocolate, raspberry & vanilla! So good! 1 PUMPKIN MUFFIN: ... 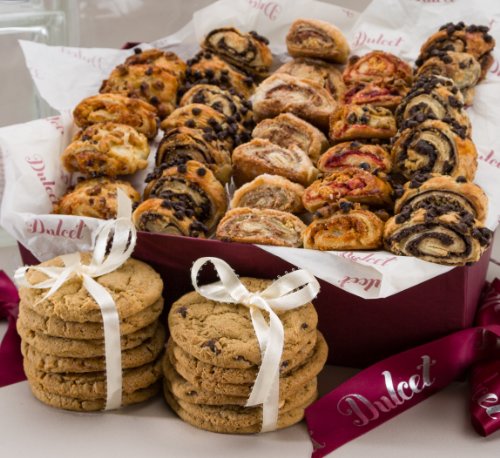 This Gourmet Gift Basket is overflowing with the fresh, Pastry Rugelah and Cookies. It"s the perfect way to celebrate, and express appreciation. Chocolate, Cinnamon, and Raspberry, Apricot displayed in an Exquisite array with the ideal cracks and crevices for your feelings of love to fit in. This best gift basket contains 6 Chocolate Chip Cookies 6 Peanut Butter Cookies 2 1/2 lb. of raspberry, cinnamon, apricot, chocolate, rugelach All fresh. All the best. All for you. Arrives in our Signature Gift Box Wrapped with you in mind SURPRISE YOUR LOVED ONE - CLICK THE "ADD TO CART" BUTTON NOW - BUY WITH US WORRY FREE! 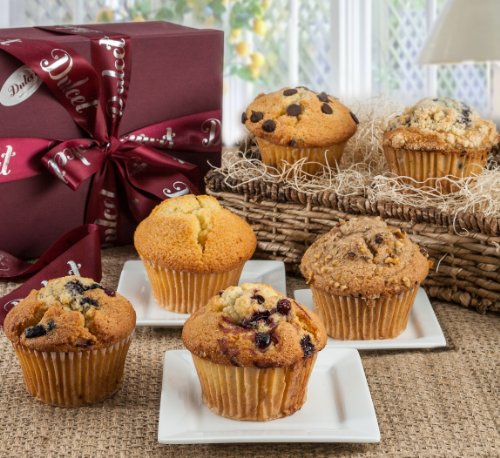 When decadent and delicious combine they form a product that's incredible! With the finest ingredients these muffins are individually baked to perfection and paid attention to detail. Every bite is filled with richness, every crumb infused with decadence. This gift basket gourmet makes the ideal presentation as a gift for your loved ones on a rainy day or to celebrate an occasion. With a personal message from you it will touch their hearts! 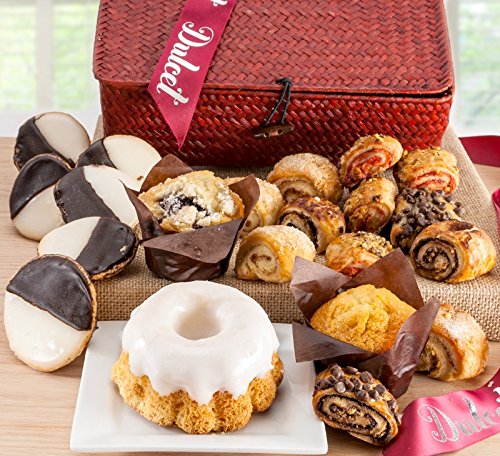 SENDING A GIFT BASKET FROM DULCET IS A WONDERFULLY WARM GESTURE - AND THE BEST CHOICE YOU CAN MAKE! Suitable and appreciated by all ages, everyone on your list is sure to be thrilled to receive a gift package like this one. BLACK AND WHITE COOKIES: The sweetest of dilemmas , chocolate or vanilla first? No worries if you can't choose - these cookies are soft, chewy, creamy and just the right size to eat in one bite LEMON BUNDT CAKE: A delcious lemony and moist bundt cake with a delicious zing from freshly squeezed lemons. Topped with white chocolate. BLUEBERRY MUFFIN: The blueberry muffins are large & tasty, with a sugary-cinnamon crumb topping. CORN MUFFIN: These muffins are moist and tender, with a slight sweet taste that's enhances the shredded kernel corns. ASSORTED RUGELACH: Our rugelach are every gift-receivers dream! A devilishly rich filling of chocolate, cinnamon & apricot erupt with gusto from within a lusciously doughy blanket - a divine indulgence CUSTOMER SATISFACTION - OUR TOP PRIORITY! Each package that leaves our store is self-designed and hand-packed. We have secured a relationship and deep trust with our customers like no others! Go ahead, click the "add to cart" button now, and join our thousands of satisfied customers! 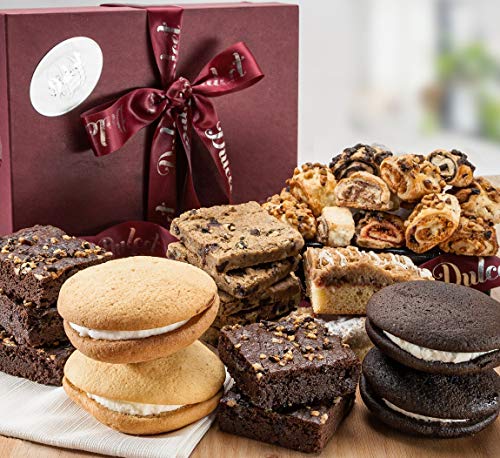 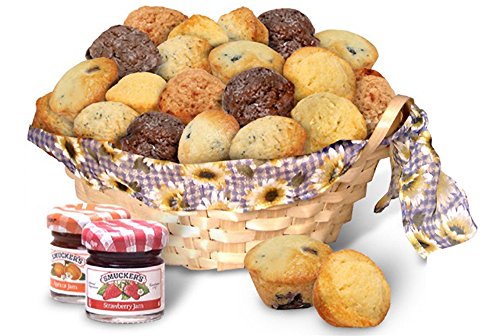 A muffin lovers delight. Our charming ribbon wrapped basket is filled with two dozen delectable baked to perfection mini muffins in flavors of double fudge chocolate chip, blueberry, cinnamon swirl, banana, corn and lemon poppy seed along with two sampler jars of delicious marmalade and jam. These delicious muffins will be sure to brighten their day. 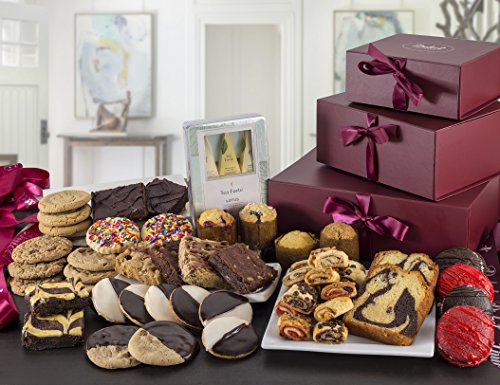 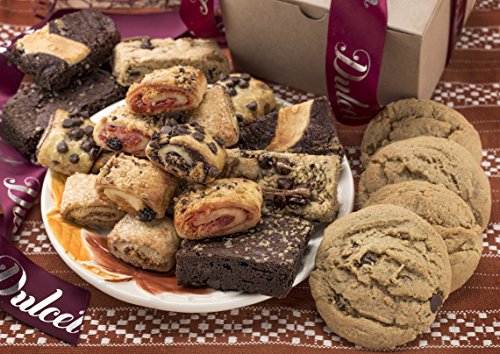 DO YOU WANT YOUR GIFT TO MAKE THE MOST LASTING IMPRESSION EVER? Dulcet is the answer - the perfect gift you just can't go wrong with! WALNUT BROWNIE: The essence of perfection, a traditional chewy brownie combined with freshly ground walnuts, so good! CHOCOLATE CHIP BLONDIE: Made with delicious chunks of semi-sweet chocolate; rich look, flavor and taste. PEANUT BUTTER COOKIES: Buttery and moist, these peanut cookies are heavy in flavor and bursting in each bite. CHOCOLATE CHIP COOKIES: Ultra this, soft, classic and scrumptious chocolate chip cookies! RUGELACH: Simply the most decadent rugelach you have ever tasted! One bite and you'll be hooked! GUARANTEED: Quality, Service and value are truly our most important ingredient and we're sure you'll agree every time you order from us! THERES A REASON WHY OUR CUSTOMERS KEEP BUYING FROM US AGAIN & AGAIN... Quality & presentation is our top priority. Each package is completely self-designed by Dulcet to mark its brand goals and high expectations; that is the reason why our customers keep buying us again and again! Satisfaction guaranteed, buy us with confidence! 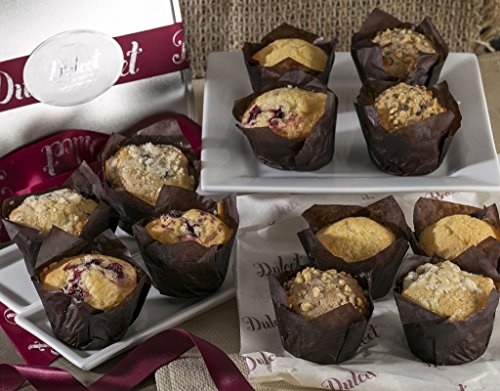 DULET'S SPECIALTY: At Dulcet, we aim to please the refined pallet with freshly baked and scrumptious indulgences. Each box is thoughtfully and artfully created and consists of the finest offering suitable for all occasions. 3 CRANBERRY MUFFINS: These cranberry muffins are moist, and chock-full of berries, they are light and tasty and so pretty! You can see those cranberries peeking out from under the muffins. 3 CORN MUFFINS: These corn muffins are moist, and have a slight sweet taste that's enhanced with whole kernel corn. So delicious! 3 BLUEBERRY MUFFINS: Bursting with fresh blueberries with a tender, cakey crumb sugar crust, these are the best blueberry muffins you've ever had! 3 BANANA NUT MUFFINS: Behold the perfect banana muffins. They're fluffy and moist and make with fresh, ripe bananas. So good! THE GIFT EVERYONE WILL LOVE AND APPRECIATE: Looking for the perfect gift they'll love? Looking to complement your breakfast, or dinner? Purchase Dulcet's muffin gift basket today! Always fresh, always loving wrapped and guaranteed to bring a smile to everyone - always! 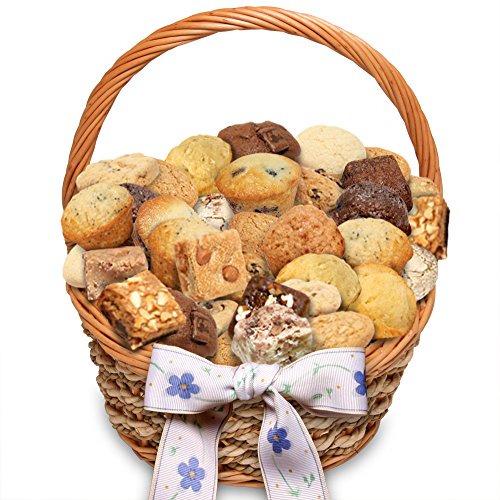 These snack-sized treats are totally irresistible and are perfect for a celebration or meeting. Our oven fresh muffins, scrumptious cookie and brownie snackers will be sure to go fast, so grab one when you can! We'll send a charming wicker basket filled with eighteen mini muffins in assorted flavors twelve scrumptious cookie snackers and six of our scrumptious brownie snackers in our most popular flavors. When all the treats are gone, be sure to enjoy the woven basket which is lined with plastic that doubles as a planter.