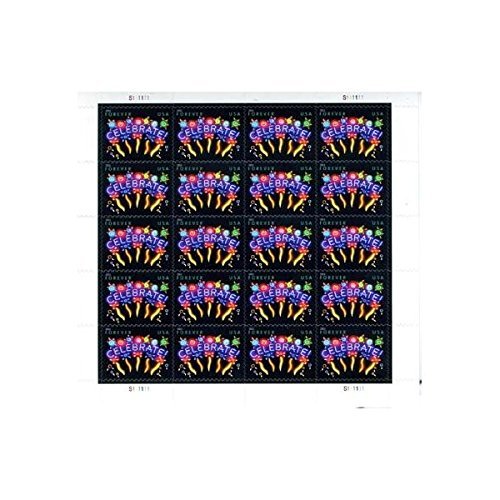 Good times call for good wishes, and the U.S. Postal Service gets in on the act with the Neon Celebrate! Forever stamp, first issued in 2011, and reissued in 2015. Bringing an extra wish for happiness to anyone celebrating a special time, this stamp features a brilliantly colored design crafted out of neon and glass that adds a spark to greeting cards, invitations, and gift-bearing envelopes and packages. No matter the occasion-birthday, anniversary, engagement, wedding, new job, retirement-this stamp will add another congratulatory wish to the good times being acknowledged. Since the early 20th century, designers have made use of the fact that neon, argon, and a few other gases, glow when an electrical charge passes through them. In 1910, French scientist Georges Claude (1870-1960) first presented the neon lamp to the public in Paris. During the 1920s, neon signs became a popular form of advertising in the United States after the Packard Motor Car dealership in Los Angeles displayed the first documented neon commercial sign in the country. Today, in addition to creating signage, artists work with neon as an expressive medium, filling and shaping glass tubes into an infinite variety of colorful images for exhibit. 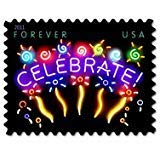 One (1) sheet Of The 2011 Celebrate Forever Each sheet of 20 x Forever United States First Class Postage Stamps. 2011 These Stamps can be used for mailing within the US Forever, for First Class Mail Issue Type: Forever Special Issue City: Cleveland, Ohio 44101 Issue Date: March 25, 2011 Issue Series: N/A This is the Neon Celebrate! (Forever) commemorative stamp, available as a Strip of 4 stamps, a Block of 10 stamps, or a Pane of 20 stamps.On March 25, 2011 in Cleveland, Ohio, the Postal Serviceâ„¢ will issue a Neon Celebrate! special stamp (ForeverÂ® priced at 44-cents), in one design in a pressure-sensitive adhesive (PSA) pane of 20 stamps. The stamp was designed by Phil Jordan of Falls Church, Virginia.Inspired by a visit to the Museum of Neon Art in Los Angeles, Art Director Phil Jordan began to think about the possibility of using neon to depict a stamp subject. He decided that a "Neon Celebrate!" stamp, with its imagery of vivid colors, fit the bill. The black background of the stamp is reminiscent of a night sky. Like a fireworks display on a summer evening, brilliantly colored images of swirls, circles and dashes in pink, blue, orange, yellow and green seem to erupt from the ground to illuminate the darkness. Each letter of the word "Celebrate" and the exclamation p... 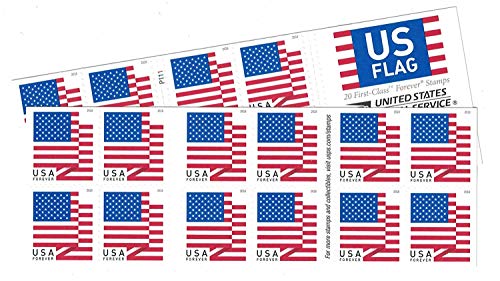 U.S. Flag forever celebrate “old Glory” with this new patriotic U.S. Flag stamp. The American flag has long symbolized the strength and spirit of our nation. On June 14, 1777, the Continental Congress passed the flag act, stating that the U.S. Flag should consist of 13 alternating red and white stripes and 13 white stars in a blue field. In 1818, Congress passed legislation stipulating that the number of stars on the American flag should match the number of States in the Union. There are 13 stripes and 50 stars on the current flag. The words “USA forever” are printed on the bottom of the stamp. This listing is for 40 Stamps (2 double-sided books of 20) of either the 2016, 2017, or 2018 version of the stamp (see images for the three varieties). if you receive these stamps in another format, such as long strips, they may be counterfeit. Beware of counterfeits: fake versions of this item have lower print quality and the wrong font and may be rejected by USPS. See images. 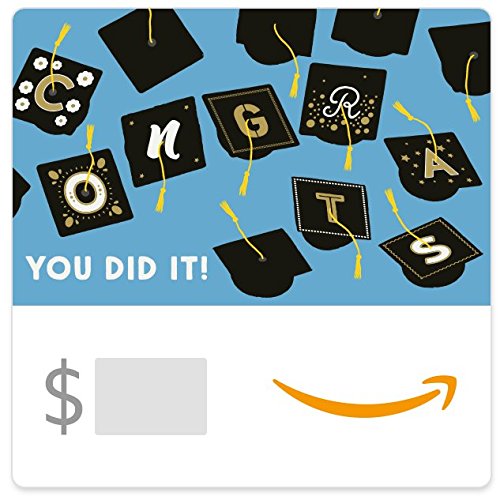 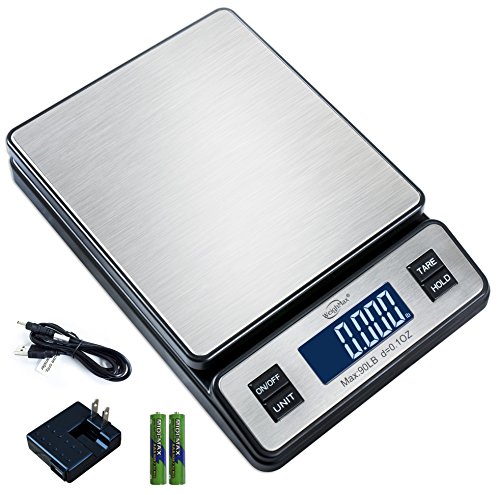 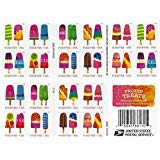 Cool off with Frozen Treats a U.S. Postal Service stamp featuring frosty, colorful, icy pops on a stick. The tasty, sweet confections come in a variety of shapes and flavors. This booklet of 20 scratch-and-sniff stamps showcases Margaret Berg's whimsical watercolor illustrations of ten different designs. The stamps are printed with a coating that evokes a sweet, summer scent. This listing is for a double-sided booklet of 20 Forever Stamps 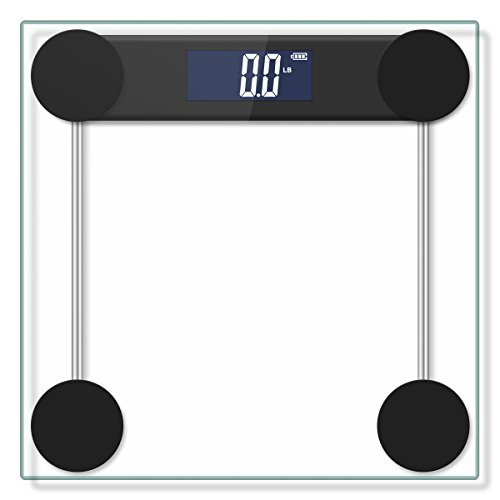 Basic Standard Capacity: 11-400lb(5-180kg) Graduation: 0.22lb(0.1kg) Net weight: 2.9lb(1.3kg)Display: 3.1" Digits LCD Product Dimensions: 11"x1.3"x11" Battery: 2x AAA batteries (Not included)Weighing automatic and Auto turn off after 10 secondsAttention1. When Unused, the scale should be left unloaded to avoid over assumption of power and failure of work.2. Try to stand in the middle place to avoid slip.3. Stand on the scale of good balance to avoid failure of lock and incorrect illustration.4. No heavy knock on the scale.5. Keep it away from water and don't wash it with water.6.The scale will take its weight when it is first used in every place, so it will have an impact on the weighing result, but after weighing several times,it will automatically calibrate. After moving the position, please weigh it several times to get the correct results after calibration.Package Included 1 x Yoobure Digital Body Fat Weight Scale 1 x Instruction Manual 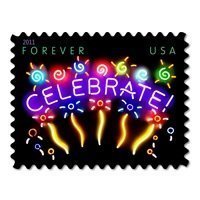 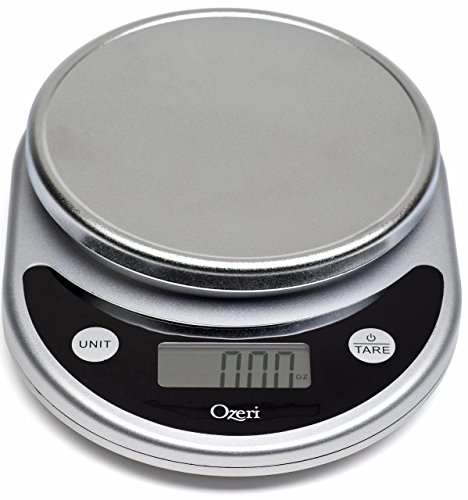 Proudly selected by the Dana Farber Cancer Institute for a Harvard Medical School study on the link between weight loss and the prevention of breast cancer, the new Pronto Digital Kitchen Scale by Ozeri is an uncompromising multifunction scale for the kitchen and home. The Pronto is built with the latest generation in sensor technology to ensure an accurate and immediate response for the fast-paced chef, and features a newly enlarged weighing platform - one of the largest in its class, to accommodate larger bowls and food items. Elegantly designed with a refined finish, the Pronto also doubles as a postage machine for your mail or a scale for your children's science projects.  The ultimate companion for the serious cook, the Pronto's large Unit button lets you change the unit of measurement with push-button ease, with 5 different units to choose from (g, lbs, lbs:oz, oz, ml) - e.g. convert (539.8 grams) to (1.19 pounds) to (1 pound 3 ounces) to (19.04 ounces) to (539.8 ml). The widescreen LCD displays provides wide viewing angle for the fast moving chef.  Manufactured to rigorous quality specifications, the Pronto weighs up to 11.24 pounds (5100 grams) in graduations of just 0.05 ounces (1 gram) to help you achieve your diet and weight goals. The Pronto also features an ever ha...