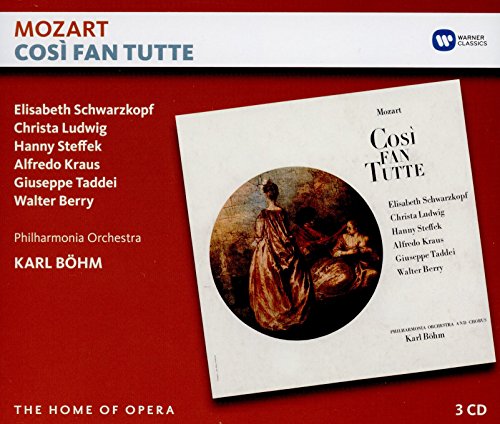 The Home of Opera series offers treasures from the world’s greatest opera catalogue, presenting some of the most important and admired recordings of complete operas produced by Warner Classics/EMI Classics over the last 60 years 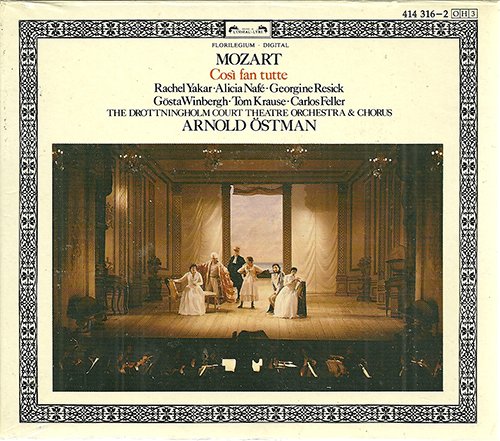 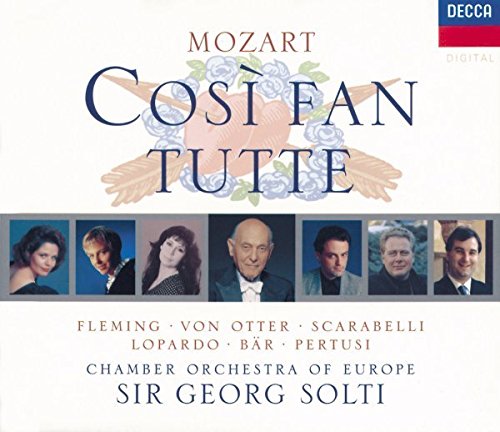 This delicately balanced story of two engaged couples who are inveigled into a brief flirtation with infidelity inspired some of the finest music Mozart ever composed. It is often textured with the fine nuances of chamber music, with some particularly delectable woodwind parts, and it progresses from contrived artificiality--when the two men make a rash bet with a friend about the unshakable faithfulness of their fiancées--into intense despair when that fidelity begins to be shaken. There is also slapstick-level comedy. It is all held together under Georg Solti's genial direction, with singing--solo and ensemble--of the highest quality. --Joe McLellan 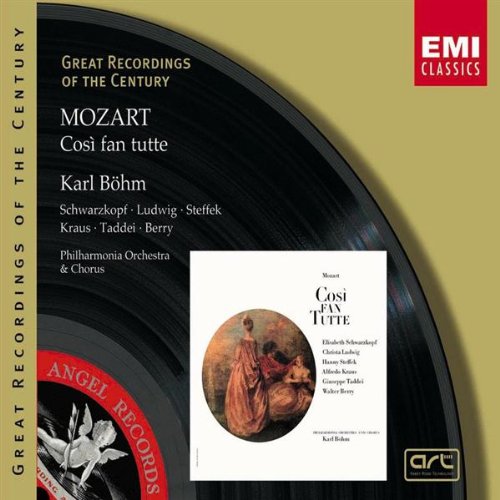 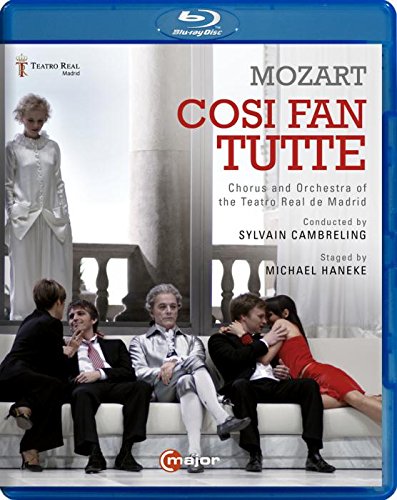 Staged by Oscar winner Michael Haneke, these 2013 performances at the Teatro Real de Madrid received rave reviews. As a bonus, an excellent interview with Haneke about Cosi fan tutte. 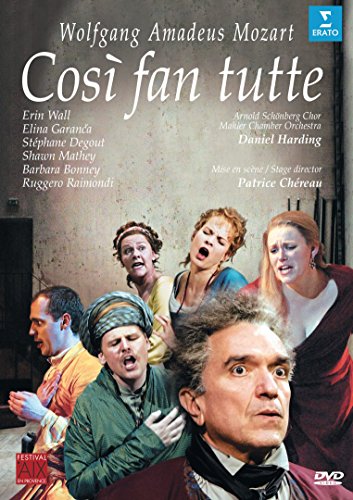 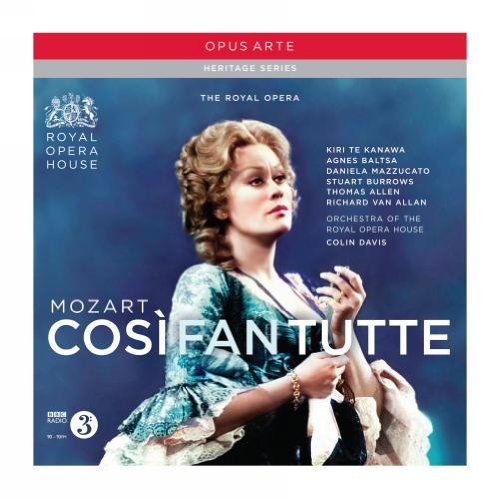 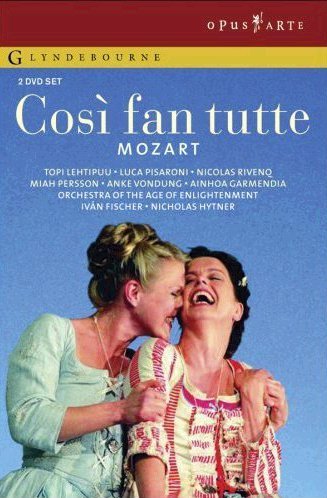 Mozart's genius in setting to music Da Ponte's comic play of love, infidelity and forgiveness marks Così fan tutte as one of the great works of art from the Age of Enlightenment. Nicholas Hytner's beautiful production for the Glyndebourne Festival in 2006, with its sure touch and theatrical know-how, lives up to its promise to be 'shockingly traditional', while Iván Fischer teases artful performances from an outstanding international cast of convincing young lovers. Press Reviews"When I saw this production at Glyndebourne, I thought that it was one of the three perfect operatic performances that I have ever been to. That view is only strengthened by seeing this marvellous DVD, which does the fullest justice to the brilliance of Nicholas Hytner's production, and the glorious orchestral playing and the magnificent singing under Iván Fischer." (BBC Music Magazine) "Hytner on Opus Arte succeeded on every front, bringing out the fine qualities of the whole cast...The teamwork as ever at Glyndebourne is superb." (The Penguin Guide) "Since 1934 when Glyndebourne revived this then-neglected work and began its run of success it has presented a succession of exemplary stagings all within the parameters of da Ponte's libretto. When this, the latest, was produced it was universally haile... 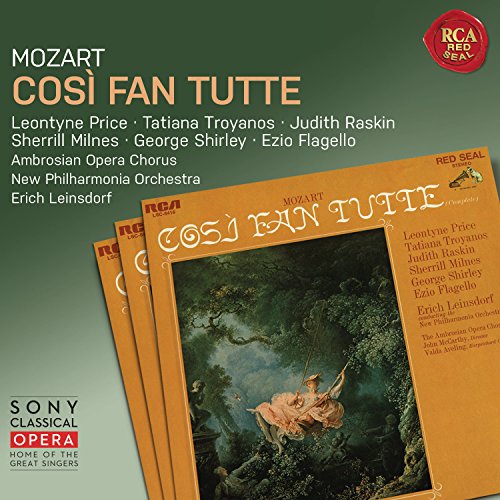 This 1967 RCA recording was praised by BBC Music Magazine for conductor Erich Leinsdorfs judicious pacing and the ensembles panache. Cosi fan tutte, which premiered on January 26, 1790 in Vienna, is an opera buffa by the master composer Wolfgang Amadeus Mozart. The libretto was written by Lorenzo Da Ponte, who also write the libretto for Don Giovanni and Le nozze di Figaro, two more of Mozarts most famous operas. Erich Leinsdorf performed and recorded with leading opera companies across Europe and the United States during his long career. He is most remembered for his November 22, 1963 concert with the Boston Symphony, during which he had to announce the assassination of President John F. Kennedy. He followed the news with the Funeral March from Beethovens third symphony. The set boasts gorgeous, grand voices, headed by Leontyne Price, stately, imposing [Tatiana]. Troyanos is a lively, palpitating Dorabella with a good sense of style. Her voice matches Prices nicely. The orchestral playing is beguiling, especially in the wind department. (Gramophone) 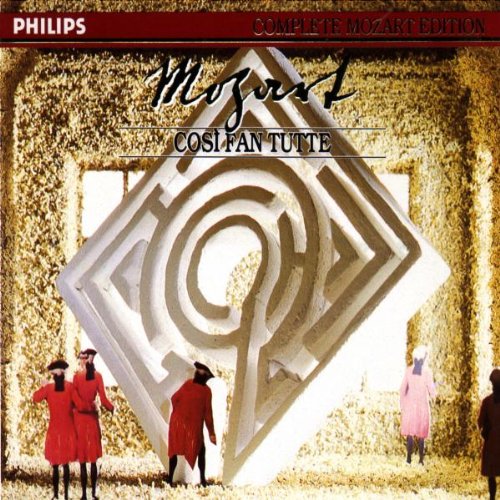 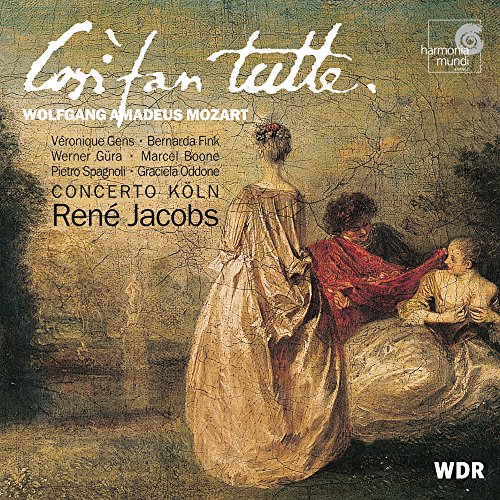 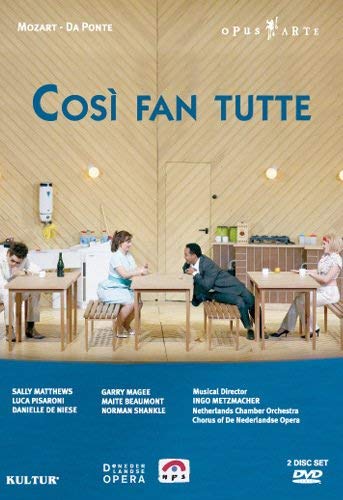 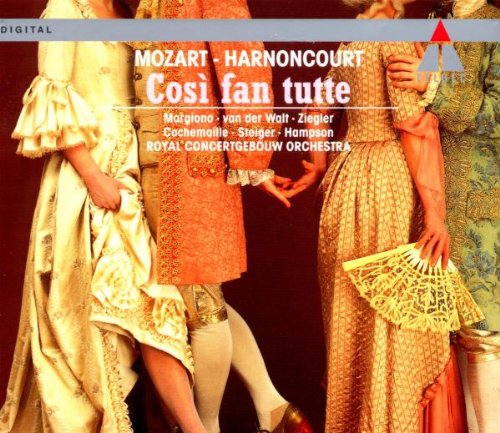 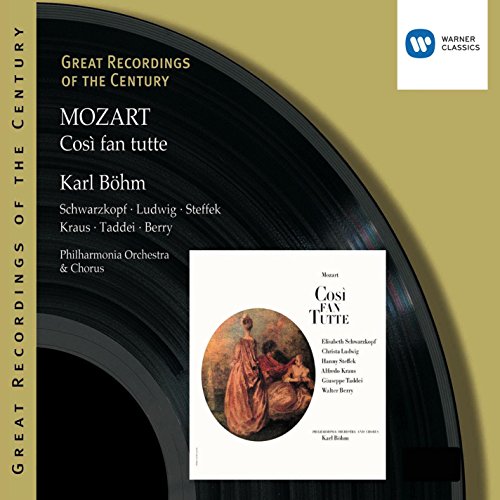 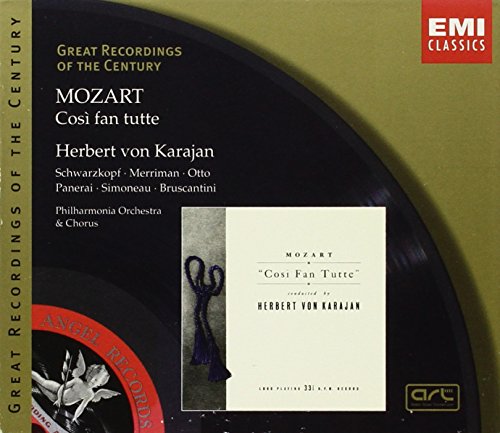 By and large, Herbert von Karajan's 1954 Così Fan Tutte is the most satisfying of his early EMI Mozart opera recordings. The Philharmonia Orchestra, for one, played like crazy for Karajan in his pre-Berlin Philharmonic days. True, EMI's new transfer cannot disguise the recording's age; yet an added sense of room tone gives the vivacious wind playing an extra, welcome edge. Karajan's fleet tempi and knowing accentuations propel the music forward even more than the gaping cuts in the recitatives. Elisabeth Schwarzkopf's Fiordiligi and Nan Merriman's Dorabella are seductive and sizzling, with Lisa Otto's Despina not far behind. As Ferrando, Léopold Simoneau's elegant legato and word-painting skills come to the fore in "Un'aura amorosa," and Sesto Bruscantini's Alfonso remains one of the best-sung on record. This shouldn't be your primary Così, but it's a release that has more than mere historic interest. Full texts and translations are included. --Jed Distler 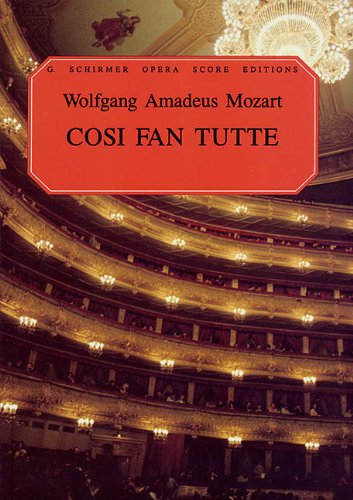 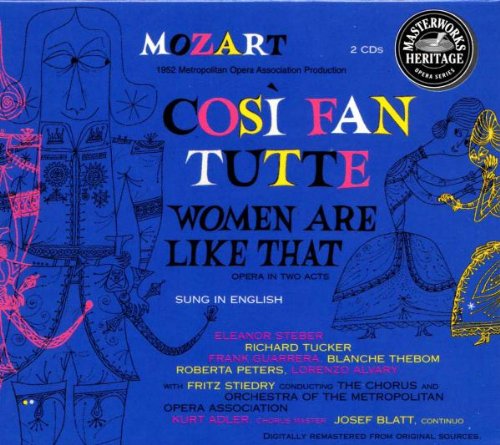 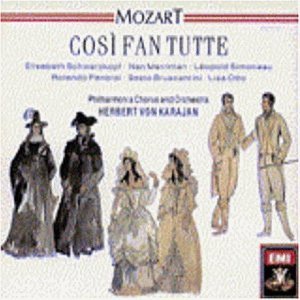 On EMI Classics 69635; 3 CD's; By and large, this is the most satisfying of all of Karajan's Mozart opera recordings. The Philharmonia Orchestra plays superbly for Karajan. EMI's transfer gives the vivacious wind playing an extra, welcome edge. Karajan's fleet tempi and knowing accentuations propel the music forward delightfully. Elisabeth Schwarzkopf and Nan Merriman are seductive and sizzling, with Lisa Otto not far behind. Leopold Simoneau's elegant legato and word-painting skills come to the fore in "Un'aura amorosa" (he may be the best Ferrando ever recorded), and Sesto Bruscantini's Alfonso remains one of the best-sung on record. As well, Rolando Panerai is excellent. Additionally, "The Penguin Guide to Opera on Compact Disc" says, "Karajan has rarely made an opera recording more felicitious than his 1954 set of 'Cosi Fan Tutte.' Commanding as Schwarzkopf is as Fiordiligi in [her later recording], the extra ease and freshness of her singing in the earlier version makes it even more compelling. Nan Merriman is a distinctive and characterful Dorabella, and the role of Ferrando has never been more mellifluously sung on record than by Leopold Simoneau, ravishing in 'Un aura amorosa.' The young Rolando Panerai is an ideal Guglielmo, and Lisa Otto a pert Despina, while Sesto Brus... 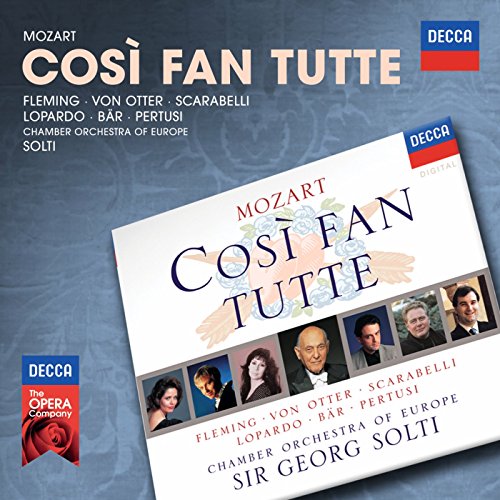 November sees the launch of Decca's new OPERA series, with beautiful new covers, re-establishing Decca as THE OPERA COMPANY.The launch of this series sees 20 legendary Decca Opera Recordings in new and fresh packaging, using the original sleeve, showcasing many of the greatest opera recordings ever made. Several of these recordings are reissued at mid-price at the first time, whilst others have been unavailable for many years, so see a welcome return to the cataloge. 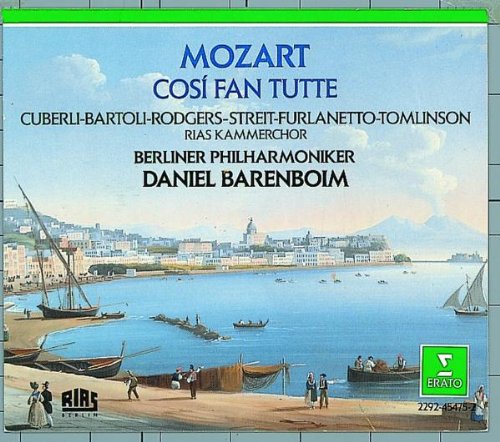 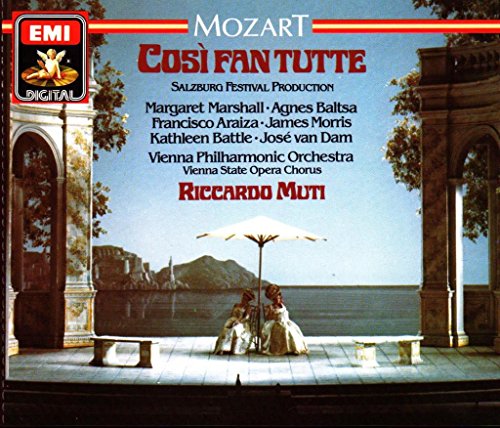 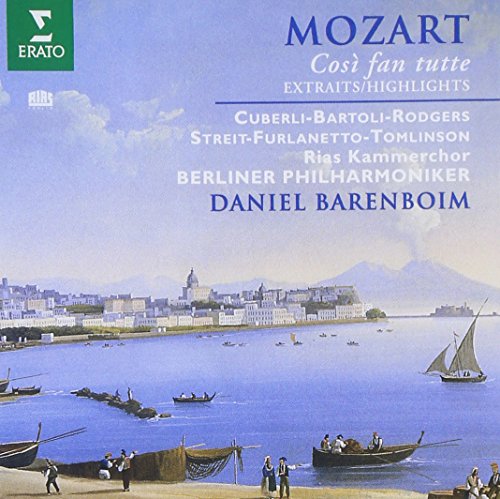 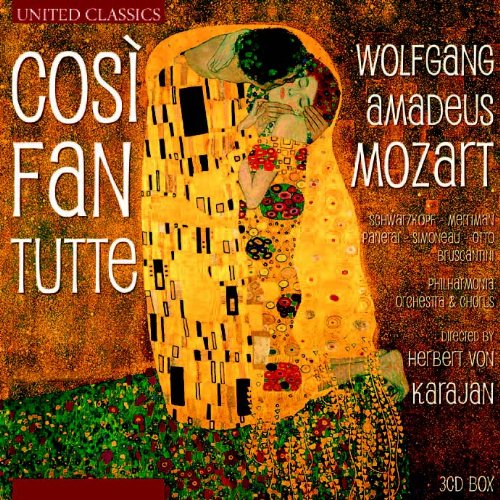 Beethoven thought the libretto immoral, Wagner thought it trivial. It was Herbert von Karajan's mentor and inspiration, the composer and conductor Richard Strauss, who brought Mozart's Cosi fan tutte back centre stage in the early years of the 20th century, since when this exquisite, witty and subtly disturbing exploration of sexual politics has become one of Mozart's best-loved works. The present set preserves one of its most admired recordings, originally released in the autumn of 1955 on the eve of the bicentenary of Mozart's birth. Gramophone described it as a 'superlative issue', perfectly staged for the microphone with an ideal cast and conducting and playing of the finest quality. 'Listening with friends in my music room', wrote the critic Alec Robertson, 'gave the impression that by some miracle the opera was being performed there to a scale proportionate to its size, enabling us to savour the exquisite music, without any of the usual distractions.' The review concluded, 'Whatever good things the Mozart celebrations bring us next year, I cannot think that this superb performance and recording will be surpassed.' Sixty years on, it remains an acknowledged classic of the gramophone. 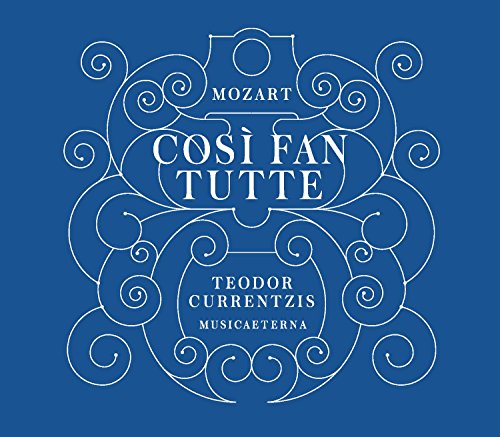 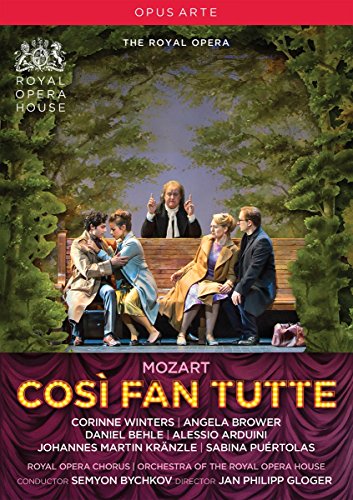 The school for lovers, Mozarts alternative title for Così fan tutte, is given a playful, theatrical treatment by German director Jan Philipp Gloger, who sets this new production for The Royal Opera in a theatre. The four lovers are performed by a cast of young rising stars, with Sabina Puertolas as the fun-loving Despina and acclaimed German baritone and comic genius Johannes Martin Kranzle as the impresario Don Alfonso, who leads the lovers on a role-playing journey full of picturesque settings. Semyon Bychkov conducts the Orchestra of the Royal Opera House in one of Mozarts most beautiful scores, packed with wonderful arias and ensembles. ""Ensemble singing is strong; the standout is Daniel Behles gorgeous tenor as Ferrando. Above all, Semyon Bychkovs impeccable balance and pacing in the pit allows it full space to blossom."" (The Independent) ""Semyon Bychkov gives an enthralling lesson in Mozart from the outset. Conducting his first Mozart opera in 20 years, he has a style might be said to belong (in the best sense) to the old school. But, Bychkov draws glowingly warm playing, and the textures are lithe and lively. The scores darker colours are all brought out in a performance that bristles with dramatic tension."" (The Daily Telegraph) 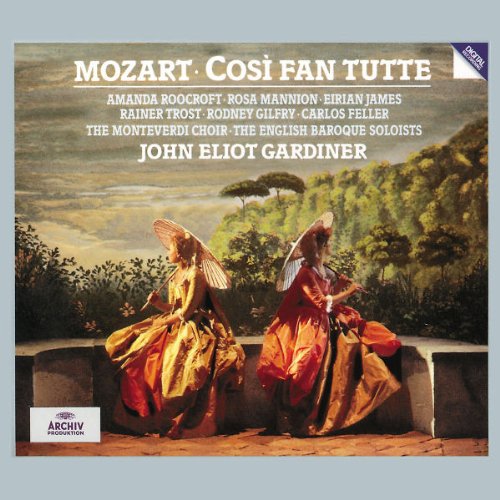 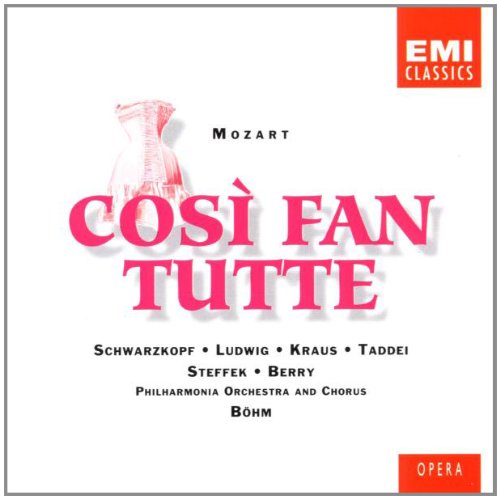 In this recording, given a cast in which he has confidence, Karl Boehm lets the singers take a strong role in shaping this performance--a risky choice because Cosi depends on ensemble work more than virtually any other opera. It works beautifully, particularly in the case of Elisabeth Schwarzkopf and Christa Ludwig, who blend their voices and work off one another as though they really are sisters. Schwarzkopf's tendency to touches of archness and artificiality happens to be perfectly suited to the character of Fiordiligi. The men in the cast are a shade below the high standards set by Schwarzkopf and Ludwig, but they work together effectively. --Joe McLellan 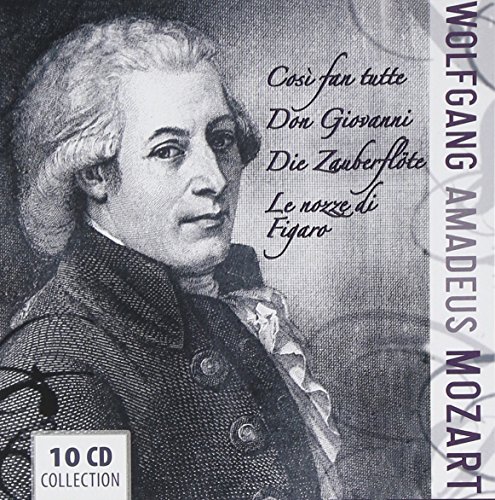 I will ship by EMS or SAL items in stock in Japan. It is approximately 7-14days on delivery date. You wholeheartedly support customers as satisfactory. Thank you for you seeing it. 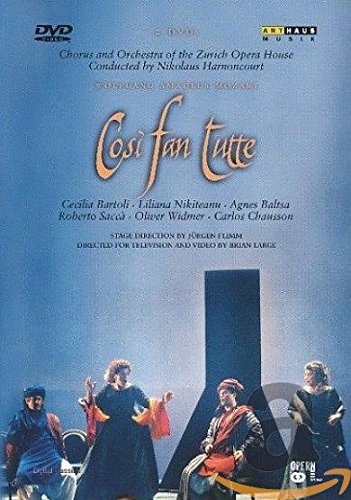