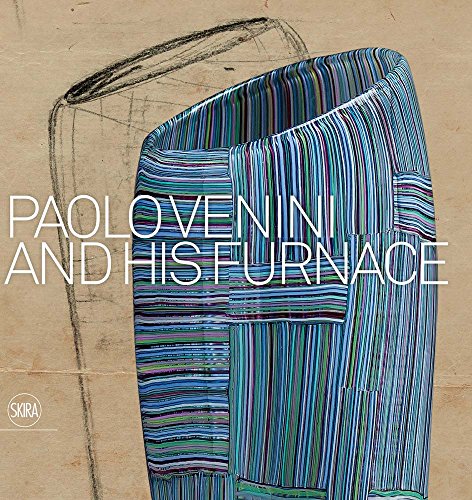 Paolo Venini and His Furnace

Paolo Venini and His

In-depth research based mainly on the unpublished materials coming from the Venini Historical Archive. The protagonist of Murano glass in the twentieth-century, Paolo Venini (1895–1959), with his passionate activity spanning almost forty years, made a decisive contribution to the vitality of the art of glass, achieving extraordinary results soon recognized internationally.For the greater part of the three hundred models in this volume, Paolo Venini had recourse to the traditional Murano techniques, of which he gave a refined and innovative interpretation. The volume also documents the contribution of the artists who worked with him intermittently between the 1930s and the 1950s. Two hundred and fifty glass pieces tell the story of collaborations with Tyra Lundgren, Gio Ponti, Piero Fornasetti, Eugène Berman, and Riccardo Licata, but also the Americans Ken Scott and Charles Lin Tissot. To them must be added the architects Massimo Vignelli and Tobia Scarpa, and the Norwegian designer Grete Korsmo. 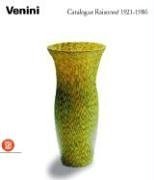 Venini. Catalogue Raisonné 1921-1986 offers an in-depth account of the involving company history of the glassworks set up by Paolo Venini in 1921 and carried forward by members of the Venini family up until 1986, the year in which the business was sold off. Alongside the comprehensive catalogue containing some 250 descriptions detailing each item produced in over six decades of activity, the book's curator Anna Venini Diaz de Santillana has traced the history of the 'Vetrerie Venini' glasshouse through each successive master craftsman's term as art director: Napoleone Martinuzzi, Carlo Scarpa, Paolo Venini himself, Tomaso Buzzi, Fulvio Bianconi, and Ludovico Diaz de Santillana.The careful analysis underlying each critical essay and the breadth of topics covered make this book an invaluable reference work on the creative enterprise and outstanding achievements of Venini & C., long acknowledged as an international hallmark of quality in the applied arts.With its rich array of illustrations and catalogue of the firm's key production items, and an extensive reference section comprising glossary, bibliography, and list of exhibitions, this book is the most exhaustive directory of the Venini glasshouse's production. In addition to the renowned Catalogo verde and Catalogo rosso, the cu... 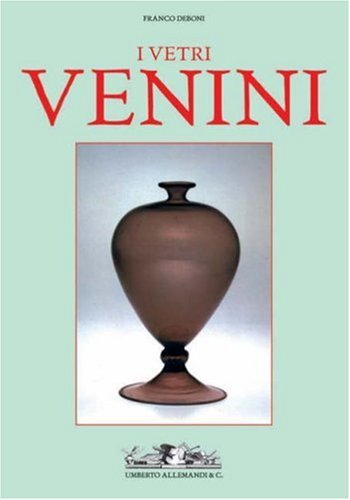 One of the most important changes during the 20th century was the evolution of the decorative arts from the rank of crafts to that of art: glass, today, has duly earned its place in museums, markets and the public opinion. The extraordinary inventiveness between the end of the 1940s and throughout the 1950s, together with the enormous success enjoyed by Venini design, helped arouse international interest in Venetian glass. New techniques, impossible to imitate, risked consigning the firm's earlier production (from 1925 to the Second World War) undeservingly to the shadows while they placed Venini artworks among the highest artistic expressions of our times. The much awaited reprint of the last edition of the catalogue raisonn, has been enlarged with a section on lighting (lamps and chandeliers), a Dictionary of artists, the Red Catalogue, the Green Catalogue and the extended Blue Catalogue (doubled compared to the earlier edition). These three catalogues contain all the reproductions of Venini item 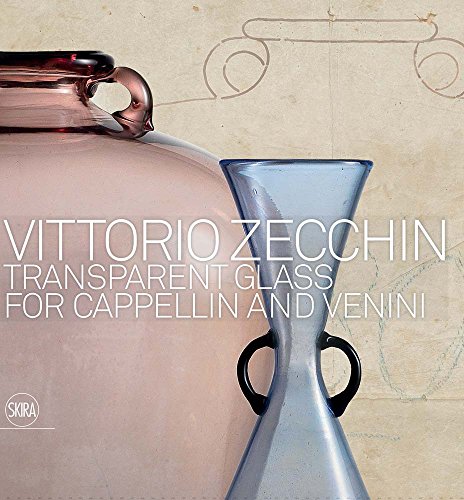 Vittorio Zecchin: Transparent Glass for Cappellin and Venini presents, for the first time, the entire glass production of Murano painter and glassmaker Vittorio Zecchin (1878–1947) at the two storied glassworks.Between 1921 and 1925, Zecchin served as artistic director of the V.S.M. Cappellin Venini & Company glassworks, founded in 1921 by the Venetian antiquarian Giacomo Cappellin and the young Milanese lawyer Paolo Venini to offer a sophisticated, modern style of glass production. Responding to the demands of the firm and its customers, Zecchin created startlingly modern monochrome blown-glass pieces with extraordinary colors and elegant, minimal lines―a radically new style for glass that marked a decisive turning point in the 20th-century history of Murano.Vittorio Zecchin: Transparent Glass for Cappellin and Venini reconstructs for the first time the entire collection of transparent blown-glass pieces designed by Zecchin between 1921 and 1926, first for Cappellin and Venini and then for Cappellin alone. It includes a sequence of about 900 luminous objects (from vases to compote bowls, from table services to chandeliers), painstakingly identified following rigorous research, and extensively illustrated here with new photography, plus a selection of largely unpublished peri... 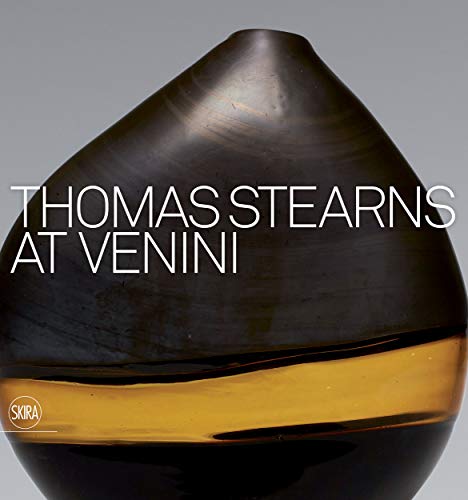 American artist Thomas Stearns (1936–2006) collaborated with the legendary Venini glassworks as a guest designer between 1960 and 1962. Stearns was the first American to design for Venini; he won a Fulbright Travel Grant, left Cranbrook Academy and showed up in Murano with plenty of new ideas for elegant, irregular blown-glass pieces (but absolutely no knowledge of the Italian language). Stearns’ groundbreaking designs, characterized by asymmetrical forms and bold blocks of color, won the “Best of Show” award at the 1962 Venice Biennial, but proved too difficult to put into mass production―inadvertently preserving them as precious, limited-edition art objects. The latest in Skira’s series of monographs on 20th-century glass, Thomas Stearns at Venini tells the fascinating story of Stearns’ collaboration with the venerable Italian glassworks. An essential volume for collectors, scholars and dealers, the publication catalogs all of Stearns’ production at Venini. 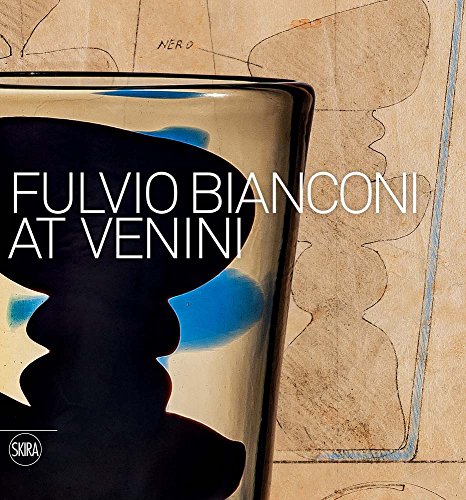 The refined output of vases, bowls, and animals by the great graphic artist, illustrator, and designer for the long-standing Venetian glasshouse. 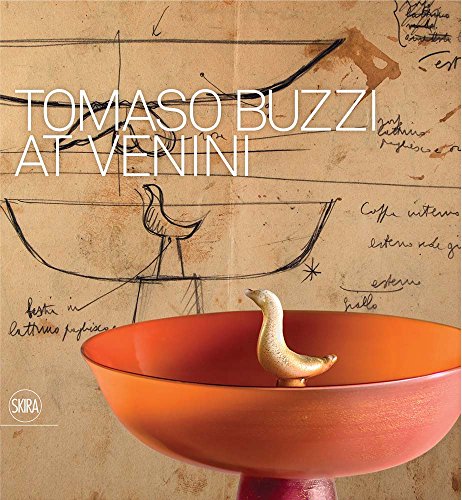 The refined output of vases and bowls by the great architect and designer for the long-standing Venetian glasshouse. An architect, designer, interior decorator, and columnist for Domus magazine, Tomaso Buzzi (1900–1981) was one of the most important trendsetters for Italian taste in the 1930s and 1940s. This volume provides a complete overview of the refined oeuvre of Buzzi, who worked in close partnership with Venini & Co. in 1932 and 1933. 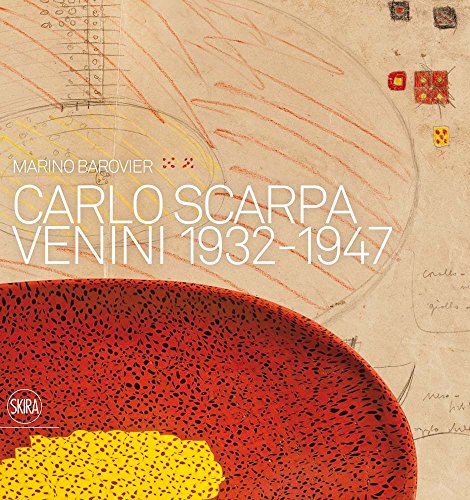 A splendid catalogue devoted to the work of an artist who was responsible for some of the most original glass artworks in art history. Through around 300 works, documents, and original drawings from private collections and museums from all over the world, this important volume reconstructs the work and life of Carlo Scarpa from the very beginnings of his career when he worked as artistic director for the Venini glassworks, between 1932 and 1947. It is no coincidence that Scarpa’s glasswork can be organized into no less than thirty distinct styles, differentiated by the technique of execution and the glass construction method used. We need only think of the corrosi (corroded), in which the material is attacked and eaten into by sawdust soaked in hydrofluoric acid. 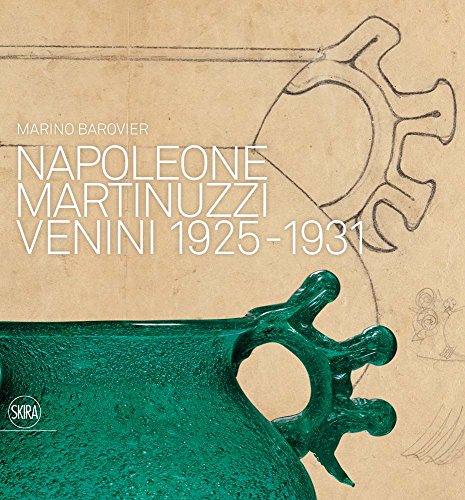 A splendid catalog devoted to the work of an artist who was responsible for some of the most original glass artworks in art history. Napoleone Martinuzzi became a partner of leading Murano glassmaker Paolo Venini in 1925. In his capacity as the artistic director of V.S.M. Venini & Co., he designed marvelous objects until 1931. This book reviews his entire body of work as a glass designer, consisting of about 600 pieces identified after lengthy and thorough research. Unpublished records in the Archivio Storico Venini have allowed researchers to appreciate the full extent of Martinuzzi’s contribution to the factory’s production and to identify many of his designs, some of which were previously unknown. After devising elegant, clear blown glass objects, the artist went on to explore previously unseen matter like bubble glass and opaque glass in intense and solid colors. In so doing, Martinuzzi designed a wide repertoire of vases, cups, lights, and peculiar decorative objects like fruits, colored glass creatures, and succulent plants, some of which were monumental in size. The book contains a wide range of period photographs, signed designs, and factory drawings. 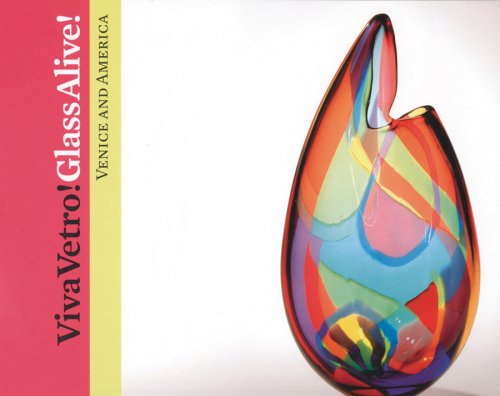 Venice has been a preeminent glass center since the sixteenth century, and for more than 500 years European factories and designers have tried to emulate the city's success by adapting or copying designs and techniques associated with the Venetian masters. Since the 1950s, American artists and designers have also looked to Venice for inspiration, traveling there to immerse themselves in traditional glass factory environments and working directly with Venetian masters. As the 1960s Studio Glass movement burgeoned and flourished, Venetian masters also began to travel to the United States, not only to teach but also to learn. A stimulating and exciting dialogue was born, which continues to this day. This volume examines the critical links between Venetian and American artists. Among other things, it covers early American designers, Robert Willson/Fucina degli Angeli, Americans in Venice (Dale Chihuly), Chandeliers, Venetians in America (Lino Tagliapietra), New Italians, Venini Revitalized, Josiah McElheny and Venetian Techniques. 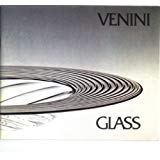 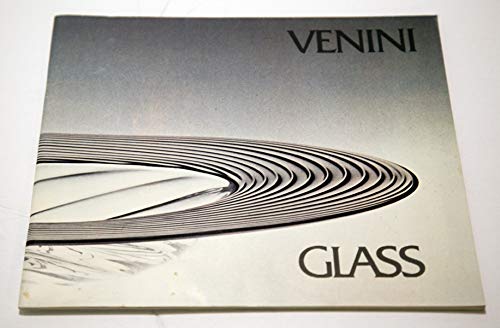 Venini Glass of Murano, Italy. Catalog of the Traveling Exhibition Service of the Smithsonian Institution, 1981. 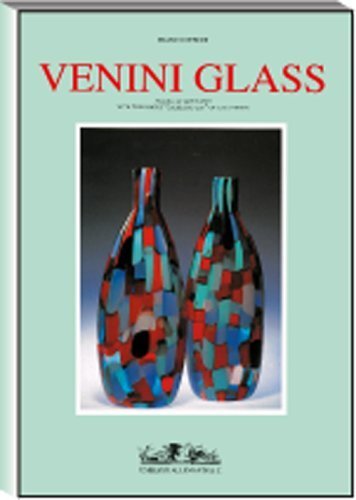 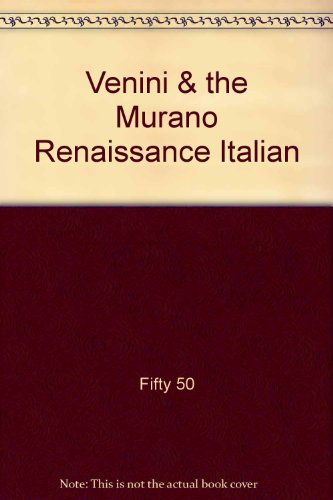 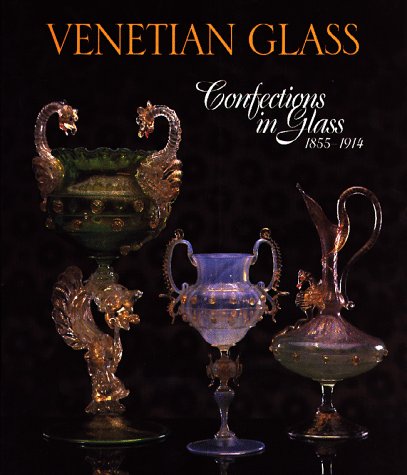 Some 100 exquisite, full-page, color photographs by John Bigelow Taylor are accompanied by text from New York glass dealer Barr. They survey art glass pieces made in Venice during the 19th and 20th centuries; among them are goblets, vases, decanters embellished with dragons, serpents, birds, and flowers. Often details are also shown in closeups. No index. The CiP data shows the subtitle as Confections of the Glassmaker's Art. Annotation c. by Book News, Inc., Portland, Or. 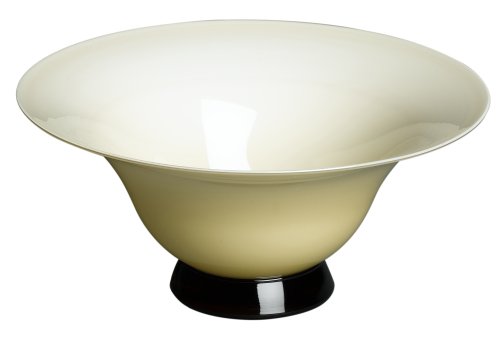 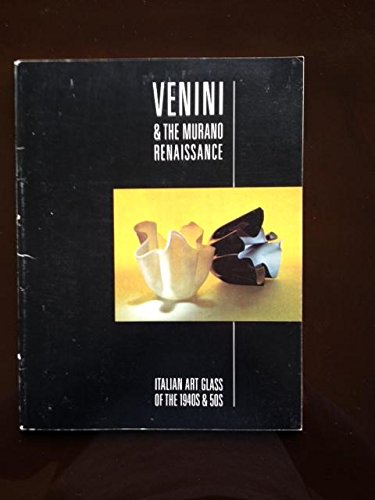 Venini and the Murano Renaissance: Italian Art Glass of the 1940's and 50's

This rare soft bound book accompanied the 1984 exhibition of Venini glass at Fifty/50 gallery in New York City. 8.5"x11", 12 pages of text plus 28 color plates of excellent photography illustrating 63 pieces. Approximately 40 pages. Very good condition for age and use. It features vases, decanters, and bowls, and figures, created in the the 40s and 50s, shown in full color whole-page photographs, printed on good stock, with an introduction, biographies, and brief list of references. Cover and back show light shelf wear consistent with age. No bends, tears or writing. Spine intact. Back cover has a 3" scratch probably created by a box cutter. The scar does not penetrate the back cover or any pages. I purchased this book in the early 90s at the gallery and it has been held in my tobacco free library since then. Free shipping 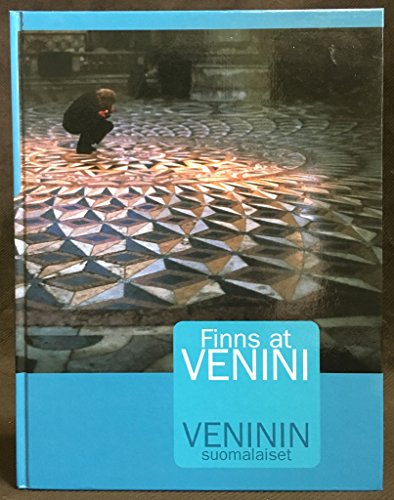 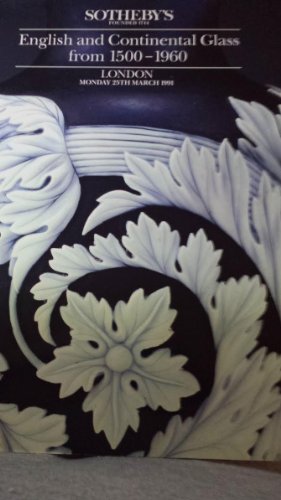 Sotheby's English and Continental Glass From 1500-1960

Sotheby's English and Continental Glass From 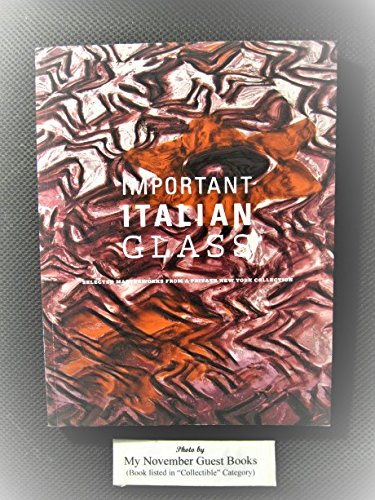 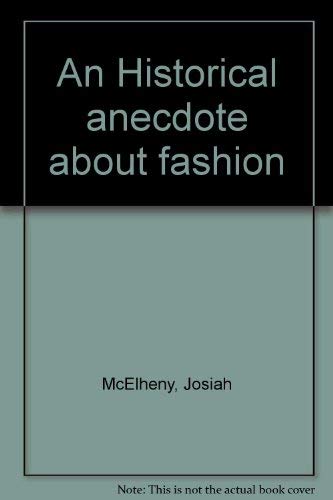 An Historical anecdote about fashion

An Historical anecdote about

Introduction; An Historical Anecdote About Fashion; The New Look; A Brief History of the Venini Glassworks; Theater in a Bottle; Exerpts from White Walls, Designer Dresses: The Fashioning of Modern Architecture 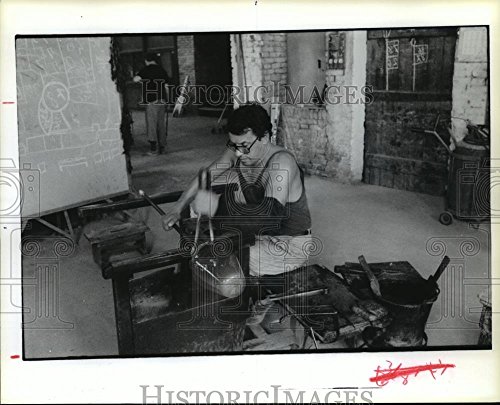 This original vintage photograph is from one of various news service and newspaper photo archives from locations around the country including: Boston, Detroit, Tampa, Chicago, Denver, Seattle, New Orleans, Milwaukee, Portland, Spokane, and more. I do not copy or reproduce any photographs -- every item is a unique vintage piece that was housed in a news archive. All of my photos are in used condition and none have been officially rated. The best indication of condition is the scans you see on the listing which are scans of the individual photo being sold and not a stock image. Please study the images carefully to determine the condition of this vintage photograph, as it may not be in perfect condition. It may contain wrinkles, cracks, and possibly even tears due to its age and how it was handled before it got to us. A scanner may interpret colors and contrast differently than human eyes will, so it is possible that the actual photograph may be slightly darker or lighter in person. 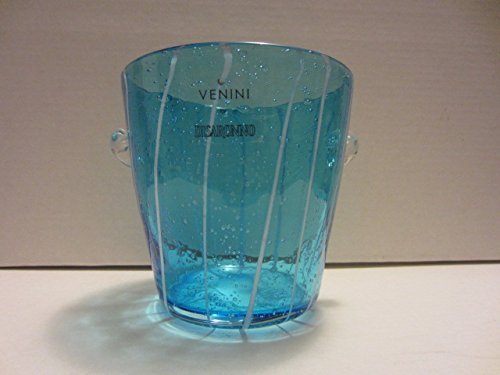